Phase 1: the preparation of the milk

The buffalo milk, collected every morning at 3 am at the buffalo farms, is brought to the Dairy and is discharged into the tini (large circular tanks).
Here, to bring the milk to the right acidity and trigger fermentation, the siero innesto (the buffalo milk whey deriving from the processing of the previous day) is added and the milk is heated up to a temperature of 35-45 degrees.

When the milk reaches the right temperature, rennet (a substance of animal origin that favors the coagulation of the milk) is added, to have the separation of the solid part (the curd) from the liquid part (the whey).

Phase 3: the breaking of the curd

After about 30 minutes the cheesemaker makes a first break of the curd, making a cross on the surface with a knife. After about an hour, the curd – which meanwhile has assumed a consistency similar to a pudding – is reduced into small pieces through an instrument called spino.

Phase 4: the maturation of the curd

Once the curd has been reduced into small pieces, it settles to the bottom, while the liquid part (whey) emerges on the surface and is extracted to transform it into ricotta.
After about three / four hours of maturation, the curd grows into a uniform and elastic mass, which will then be spun with hot water.

To check when the curd is ready, the cheesemaker tries to spin a small quantity and check how it spins with the help of a stick. It will be his expert eye to determine if it is possible to proceed to the next phase: the spinning.

Once the maturation is completed, the curd is cut into cubes and brought to the draining tables to remove the acid whey it contains. It is then shredded into small pieces and taken to a spinning vat where water is added at about 100° C. Thanks to the stirring of a stick – anciently made of wood, now made of metal – a stringy and uniform dough is obtained, which has a consistency that is already very similar to real mozzarella.

Phase 7: the cutting off

When the dough is ready, a worker takes a piece of it out of the vat and works it by hand to obtain a spherical shape. Another worker breaks the mozzarella by hand, giving it the typical shape. At this point the mozzarella is immediately immersed in cold water, so that it cools down and keeps the shape.

Phase 8: the firming and the salting

After a few minutes, the mozzarella is transferred to cooling tanks containing a liquid obtained from the spinning water of the previous day. More or less salt has previously been added to this liquid, based on the size of the mozzarella it must contain.

When the mozzarella is finally ready, it is packed together with a less salty preservation liquid. 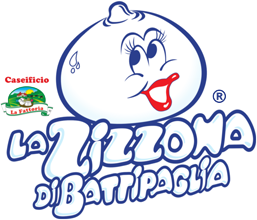